A Sour Grape Recap of Coachella 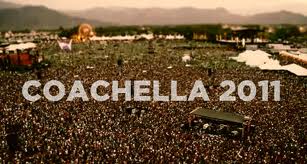 The folks at Sour Grape miss the beautiful polo fields of Indio. We now long for the unbearable desert heat that was once hated. Thankfully, the internet allows us to relive the glory of Coachella and reminisce on some of the weekend’s unforgettable moments. Enjoy Sour Grape’s recap of this year’s terrific festival.

Good vibes and plenty of pot smoke were in the air as Nas & Damian Marley electrified the main stage for festival attendees sweating under the unrelenting sun. Between performing most of their Distant Relatives album, the two icons unleashed some of their biggest hits to much approval of the baked crowd. First, take a second to appreciate that one of the greatest rappers of all time spit some of his most infamous verses including the nasty lyrical attacks on “Made You Look,” and “One Mic.” This year’s Coachella had its fair share of hip-hop, but no rapper carried the credentials or skills that could even come close to matching those of the Street’s Disciple from Queensbridge. Nasir Jones may be past his prime, but the emcee’s gritty delivery and legendry presence will never fade. Trading off tracks with Nas, the youngest son of Bob Marley soothed any tension with his reggae rap fusion. Jr. Gong belted out “Welcome to Jamrock” and other signature songs that uplifted the crowd and cooled the blazing climate. When Damian Marley finished with Bob’s “Could You Be Loved,” the duo had concluded one the most memorable sets of the weekend.

The thumping behemoth that is the Sahara Tent displayed a wide array of electronic music over three days and nights. Big names showed promise, but honestly a ton of DJs blended together in a constant wall of bass and mediocrity. Maybe the influx of generic dubstep played a role, but only a handful of DJ sets stood out. However the Friday night performance of living mixing legend Sasha was a true gem of this year’s Coachella. The Welsh DJ and producer hypnotized the crowd with smooth progressive house and his dazzling Vortek Live light show that entranced onlookers. Weaving acid house and other musical styles together, Sasha approaches mixing electronic dance music as an art form. He may not be as dance friendly as Fedde Le Grand or Steve Angello (Both killed it though), but the bald headed electro wizard is noticeably more talented and knowledgeable than most DJs these days. The experience of the electronic forefather oozes into every seamless mix and can be felt with every poignant drop. As the haunting lyrics of Telefon Tel Aviv’s “You Are the Worst Thing in the World” trickled into the atmosphere, the crowd collectively smiled upon witnessing a legend create something special.

BEST SET BY A NEW BAND: MUMFORD AND SONS

Music lovers can’t help but go weak in the knees when a newcomer band takes on an 80,000 plus crowd for the first time with ease. And that is exactly what English folk rockers Mumford and Sons did with their Saturday night performance on Coachella’s main stage. Commanding the sea of limbs with every tune, the 4-piece group proved that bluegrass is indeed dance music to be appreciated by all. While the booming Sahara tent was busy getting grimy on the other side of the festival, no crowd was grooving more than the raucous gathering at Mumford and Sons. Although they have only released one album with a pair of hit singles, the group enthralled festival attendees throughout with pure talent and raw emotion. Charismatic frontman Marcus Mumford and his banjo rocked the main stage harder than any musician of the weekend. Those hoping for a laidback time with chill tunes, received more than anticipated. Mumford and Sons exceeded even the highest expectations and put on an outstanding show.

MOST ENTERTAINING SET: EMPIRE OF THE SUN

Australian psychedelic electronic act Empire of the Sun transformed Coachella’s outdoor stage into an intergalactic dream world with a stellar production on Saturday evening. Decked out in a bedazzled spacesuit, futuristic makeup, and his signature feathered headpiece, frontman Luke Stelle quickly made it clear that the ensuing performance would be more of a Broadway spectacle than a concert. Steele and his three-piece band kicked off the journey to outer realms of the universe with the funky dance number, “Standing on the Shore,” eliciting a roar of approval from the rowdy audience. 20 plus female dancers dressed as mermaid aliens and seahorse-headed Barbie-dolls complimented the disco drama and brought the elaborate trippy backdrop visuals to life. Empire of the Sun played to the crowd and performed all of his most popular tunes, including an encore performance of his summer anthem, “Walking on a Dream.” The combination of Empire’s retro-style dance music and theatrical showmanship made their headlining performance tailored made for a cool night under the desert sky of Coachella.

The mere presence of OFWGKTA on the Sahara tent lineup provokes a “what the fuck” like statement. So when the LA rap collective followed the offensive dubstep of Skrillex on Friday afternoon, one could only imagine what was about to unfold. Coming out late to a restless crowd senselessly chanting “swag” and “free earl,” Odd Future opened with the raw banger “Sandwiches,” but then proceeded to perform new material unknown to even the most dedicated fans. Left Brain and Hodgy Beats paraded around stage screaming verbal threats, and Domo Genesis hit a spliff between weed themed verses. Baffled by the absence of Tyler the Creator, the crowd stood unengaged waiting for something to match the massive hype. And then it happened. The gang’s ringleader finally stormed onstage to perform “French” and the viral hit “Yonkers” sending the crowd into frenzy.  After feet first stage diving and raising the temperature inside the tent to a boiling point, Tyler, the Creator hushed the crowd to pronounce this was the best moment of his life. His idol and N.E.R.D. frontman Pharrell Williams then walked on stage, gave the whole crew friendly handshakes, and performed the new song he and Tyler recently produced. What the fuck? Is OFWGKTA playing the Sahara Tent at Coachella with Pharrell? The show may have been lackluster to the common spectator, but the OFWGKTA performance at Coachella was a wild statement of arrival and the perfect accumulation of Odd Future’s meteoric rise to fame.

OFWGKTA roamed around the festival ground wrecking havoc with water guns. A Sour Grape member caught footage of one lucky fan seizing her opportunity with Tyler, the Creator:

This entry was posted in Concert Coverage and tagged Coachella. Bookmark the permalink.

3 responses to “A Sour Grape Recap of Coachella”